Saturday afternoon I was sitting around feeling the need to go on a road trip... where though.. I wasn't sure. It was getting late in the day though.. 2pm already. Phone rang.
Randy "Where you at?"
Me "I'm at home. Thinking of going camping right now.
Randy " Where to? "
Me "Not sure..maybe I'll figure that out after I've left"
Randy " Going Alone?
Me "Yeah."
Randy " Can get pretty cold with no one else to warm the sleeping bag."
Me "Ha true."
Randy " Well I'm at Denny's come have a cup on your way out."

4pm. I started riding north on 14 towards Mojave from there I could make a right or a left on 58 to go to the mountains or the desert. I'd decide when I got there. The temperature was perfect.. t shirt riding weather, my bike was putting along good and I had that feeling where you feel like you could go on like this forever.  When I got to Mojave I chose right. I chose Monument Valley Az. I didn't know if I could get there and back by Monday morning but I'd try.

I rode the 58 - route 66 through Barstow then on to the 40 to Needles across the Colorado River under a full moon and a warm night air, only stopping for gas. Talked to a trucker in Ludlow who asked if it was hard to ride a motorcycle. He never had. I said if he could ride a bike he could ride a motorcycle. Another guy there asked what I was riding and after I told him he said he'd had a 68 and knocked on top of his head. "That's a metal plate." He said.  "Got it after I hit some gravel and got sideways." In Kingman I rode into town on Route 66 then got gas and hung out in a nearby diner drinking 3 or 4 cups of burnt coffee which I tried to cover up with tons of sugar packs but it still tasted terrible. Ate some apple pie. Some older guys outside said my bike was quiet for a 1200 but had a good sound. Told me about their bikes. After Kingman it got a lot colder and I put on my jacket and gloves. I didn't bring any long underwear and my knees were feeling it. My fingers started going numb under my gloves. I rode close behind trucks as there were lots of signs for deer crossing the road. The coffee was keeping me awake but the cold was making the miles go slower and slower. I wish I'd had some glove liners.. but I hadn't even worn gloves in months let alone liners and I never thought to bring them.

Around 2am I stoppred in Parks Az to get gas and decided to sleep for a few hours. I really wanted to get to Monument Valley as the sun was coming up and if I slept now I wouldn't make it but my hands and legs were freezing and thought it would be warmer when the sun came out in the morning. I found an electrical outlet outside the station to charge my phone and slept on the ground next to my bike. My sleeping bag is supposed to be rated to 34 degrees but I froze balls all night and finally got up at 5:00 am because I kept waking up from the cold and just packed back up to ride as the light was just brightening up .. hopefully it'd get warmer as the sun came up.

It felt colder than the night before and shivered all the way into flagstaff where I filled up with gas and then sat in a coffee shop trying to warm up. The sun came up a little more and it did warm up a little. I rode up the 89 towards Tuba City then left on the 160 towards Kayenta and Monument Valley. I was feeling a little groggy but the scenery and the morning sun was keeping me going.

Just outside of Kayenta around 10:00am I started seeing the formations rise out of the desert ahead and I got a burst of energy and suddenly felt like I'd slept a full 8 hours.

Talked to one of the Native American guy's that worked there driving people down into the valley. We talked about bikes and gas prices, then he told me how he had put a couple inline fuel filters and retarded the ignition a little on his old chevy truck and now he was getting twice the gas mileage.

As I rode out of Monument Valley it dawned on me that I now had to ride all the way back to LA. Didn't sound so fun now.. maybe I could just live here. Somewhat doubtful.  Maybe I'd ride for a while then sleep somewhere. I started riding back towards Flagstaff. I thought about heading north to Parks Utah and doing a nice loop. But I didn't feel like riding through another cold night again and that way would be a lot longer. If I could get back to Needles before it got too late I could ride through the Mojave desert at night in a t-shirt again. After a night of little sleep I always go through a patch where I feel like I can't go on anymore without sleep but if I push through that it feels like I'm on autopilot and I can go for days without sleep. I got to that point by the time I reached Flagstaff and didn't even stop there for gas .. got on the 40 and rode to Williams Az where I stopped and got some carne asadas. At this point all I'd eaten was two pieces of pie a pack of cherry pop tarts and a Michael Schmidt afternoons worth of Redbull. 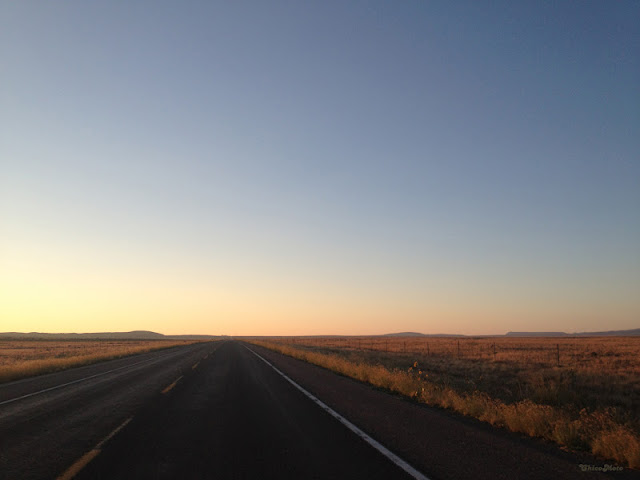 In the town of Seligman AZ I turned off the 40 and rode the more Northern way to Kingman on Route 66. This was one of the nicer sections of road so far. Sun setting in the horizon and riding an old bike on an even older road .. without much sleep I was feeling kind of loopy. Thinking about how many people had travelled on 66 and how little this landscape had probably changed over the years. Passing through the little towns that in contrast had changed a lot since I-40 had been built. They were little more than ghost towns now. I stopped in the town of Peach Springs. Taked with a Native American guy named Michael Jackson who lived there since he was a kid. Michael pointed out an old rock house that had belonged to his grandfather. Said they had filmed Easy Rider on this section of Route 66. He'd had a Honda years ago .. when he got married other women were still wanting rides on the back of his Honda so his Honda had to go.. according to his wife. He told me some history of the town .. the sun was setting and their was a golden light on everything. In my sleepless haze it all seemed a little unreal. I wanted to hang around that town for a few days but eventually I got back on the bike and headed west. I passed a train as the moon came up behind a mesa and the sky was a dim but orange red after the sun had set. It felt like it could be any era here. That things were only slightly faded from time but ultimately everything had stood still as it had been 70 years ago.

Got to Kingman filled up with gas and got back on 40 .. I was feeling pretty worn out now but I felt like I could still make it back to LA. After I got gas again in Needles I started having second thoughts. I rode behind a semi and stared at the back of it's trailer for miles. Started feeling like my balance was off and I was going to topple over. Not a good feeling while on two wheels going 70. The miles crawled by and I told myself I'd take a nap in Ludlow. Finally after what seemed like hours I got to Ludlow. I had a redbull and another one of those packaged cherry pies.. the same thing I'd eaten on the way east. I was tightening up my now sloppy loose chain when another guy on a bike pulled up. He was headed east. He asked how long it took me from Needles and I asked how long it took him from LA. After he left the Redbull kicked in and I just started riding again. He said it took about 3 hours from LA and I thought I could do that.. get home and sleep in my own bed. My bike was running good and I passed truck after truck headed west. Straight through Barstow without stopping went on reserve somewhere outside of Victorville but made it into Victorville no problem where I filled up quickly then back on to the 15 and down the hill to San Bernadino and rode the quiet 210 back home. Got home put away my bike which ran excellent the whole trip, the only problems being my spark plug wire vibrated out of the magneto cap and I had to tighten the chain on the way back. Took off my clothes that I hadn't changed since I left. Threw away my 501's .. they had gotten two new holes and were looking pretty worn out. They'd lasted all through the summer but summer felt over now. Time for a new pair.

Wow... so rad. Looks like better views than that straight shot you took from Seattle to San Diego in February.

Hey Troy, It's Brad from Detroit, Michael introduced me to you in Brooklyn - anyway GREAT pics and GREAT story. What you experienced was the good stuff - like Steve said "everything else is just waiting". Made my night, thanks.

your tale made me feel pretty anxious to get on my bike one more time before the temperature drops and snow starts to fly up here in Canada. Thanks for sharing.

Thanks man .. I hope some of that made sense. I was pretty tired when I wrote it.

Loved it troy. I feel Inspired to road trip to see one of my brother's in the san Juan islands this weekend.

Great ride, great story. I love those wide open spaces. Thanks for taking me back there.

Stuck here at the office eating a TV dinner for lunch. You story took me away for awhile. Thank You.

now that's what I'm talkin about!
next time i'm coming along...

Sitting in my dirty filthy basement,
Watching the rain through my window.
Nice one T, took me there for a bit.

Brilliant mate. Lets do it all again when I get back. Please!

My mate Matt suggested I read this, so glad he did....no cliche's here, that's 'livin to ride'.

troy gets it, literally and metaphorically.