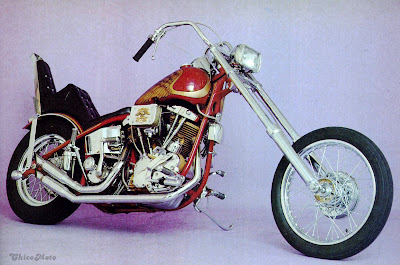 In 1977 I was watching Charlies Angels and had a Farrah poster on my wall.. who didn't? My favorite movie was Logan's Run and in 77 they came out with a lame TV version that sucked. Around this time I got 8 track tapes through those publisher clearing house deals .. where you got 20 of them for cheap but then they kept sending you a lame one every month if you didn't pick and buy one.. I always forgot and got the lame one which I would inevitably use as a frisbee .. how many eight tracks would you find along side the road in those days?

I dig this Extractor exhaust on this 67 .. low but upswept, no squishpipe shorty exhaust cans with a slight slash cut, anyone got one collecting dust they want to part with? 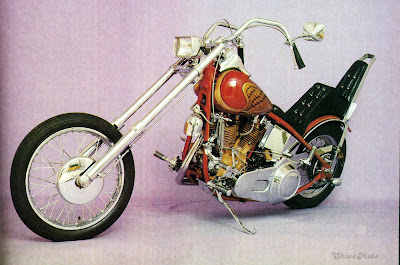 Nice how they kept the stock primary, it's been shaved and they chromed it, the stock primaries on early shovels have that sandcast look which to me looks better than chrome but to each his own.
Posted by t

It says they shaved it a bit in the article. Near the front of it