Labels: nothing seems right in 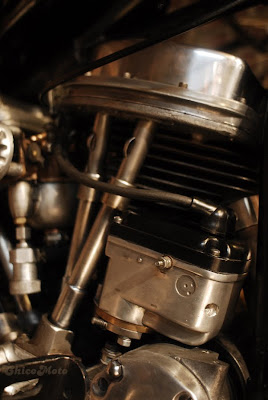 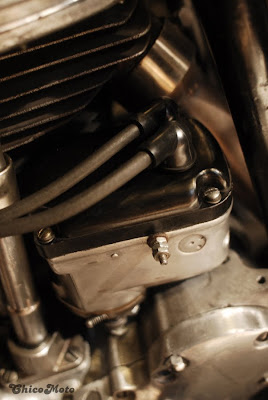 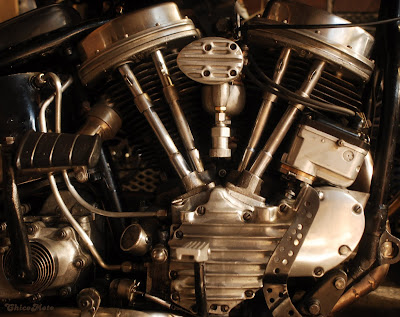 I went and bought another mag for cheap off of someone off Craigslist. This time a Morris. The Morris seems a little nicer, but the Hunt is easier to setup. If someone knows how to get the inside mounting nut (the one closest to the front head) without taking the front push rod off please let me know. I tried and tried but kept losing the nut down behind the generator. Gawdamn thing.. It's impossible to get to. Wasn't any easier to start either. Seems like I get it started by chance. Not even a puff or sign that it might start then bam it's running. Shit where's my helmet. I was thinking I'd put the morris on something else but my plans changed.

The ol' timer I bought the mag from and I got to talking .. I asked what he had it on. A 51 Pan he says.
That's what I have! Actually I know about half a dozen people with 51's. So he say's wait a sec and digs out a book of photos and starts showing me the different states he had his bike in, early 70's chopper in various bar choices and tanks, stretched springer, then on to more 80's style... then was hit by a truck. He wanted to kill the guy. I brightened up thinking some good gore would satiate my anger after my recent auto wrestling match. Did you?
Nah.. neighbors came out. His frame was toast, the front end all bent back, twisted.
I was just hit a few weeks ago on my 69 I told him.. got lucky nothing broke. Same thing happened to mine.
After that I put the motor in a swingarm frame.
I'm going the other way I told him. You still have your Pan?
Nah sold it.
Oh man.., shouldn't have.
I know. He sighed.
I wanted him to still have the bike.. go for a ride together.
My 51 one is a chopper motor.. all sorts of different parts on it. Left case was broke in the 70's .
Mine was the same.. heads were 61..
Bring your bike around he asked.
I told him I would. It's got an offset springer, handles like shit.
Oh I know.. he nodded.
I know he knew.. only reason I said so.

Wish I had a pocket scanner to scan some of his old photos on the spot, if he'd let me. They're his memories though, might be weird.

So the Morris Mag goes from one 51 to another.. couple generations later .. same shit, different time.
Posted by t 4 comments: 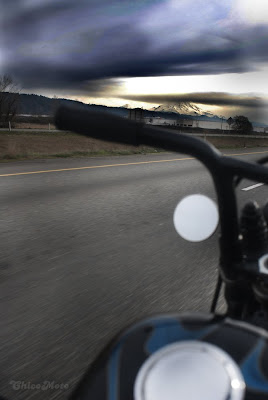 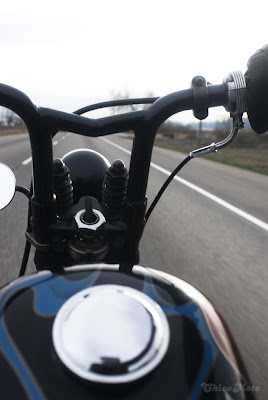 Rode a hundred miles or so this afternoon. Nice. The bike ran good. Still can't get the bike started very easy with this mag even when warm. The spark seems real weak on it even after cleaning the magnet. I'm not going to be able to put up with a bike that is so lame to start for very long so I'll probably send the thing down to Hunt and see if the magnet should be replaced.

**Update** I rode the bike downtown to the Art Walk rigamaroll.. came out to leave and damn if the chopper gods didn't smile on me. The thing started third kick, didn't retard the mag.. didn't choke the carb.. just kicked with a little throttle and it was running.. aint no thang..haha.. I tried to hide the shocked look on my face and make like it always happens like that. It used to at least .. in the pre mag days. In reality I was pretty much resigned to the fact that I was going to be the guy with the fancy old bike that wouldn't start. Thank you chopper god for smiling on me this evening.. most of the time your laughing your ass off at me but I wont talk about that now.
Posted by t 4 comments: 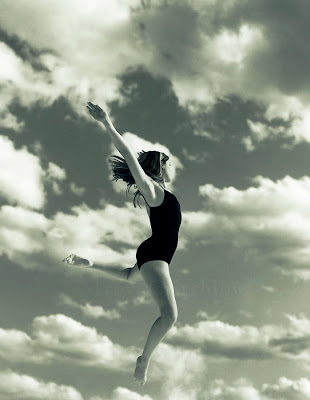 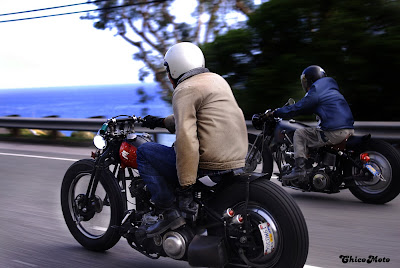 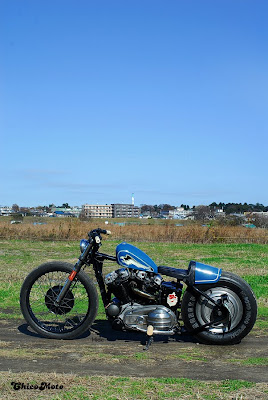 Pepper Tree where are you? 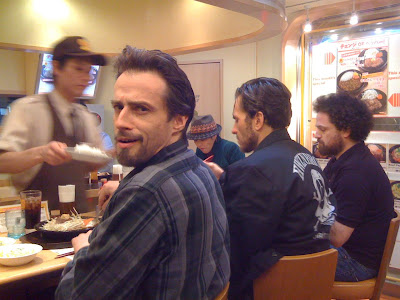 In Tokyo there's this steak /chain restaurant called the Pepper Tree.. the steaks are great and cheap, .. you chose your steak and all your sides at a little ticket dispenser on the wall. It's a chain that actually has good food. A novel concept! Johnny, Me, Monk.. back for more at the Pepper Tree.. photo by David at Death Spray Custom.

Thanks again for the Jacket Yas! I've hardly taken it off since.

Monkey.. I got your triple tree in the mail today.. needs a Sandblast but otherwise looks good. I'll resend it to you and the rest of the stuff.
Posted by t 4 comments: 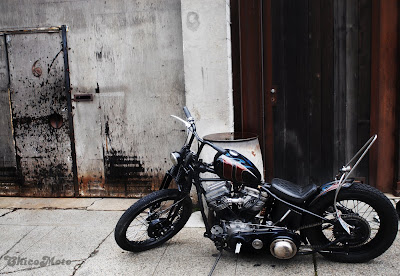 Got to ride today, it didn't rain. Saw Chris' project at Speed Shop Design coming together even more. All in all a good day.

Got pulled over by the police going slow in the evening. I always get pulled over on choppers just riding along around here. They said I didn't stop at the light when I made a right turn against it. Balancing feet up at a stop never counts. Doesn't matter that you can take off faster with a foot clutch with your feet up. One foot on the clutch and one on the rear brake. if it's clear you go, if a cars coming just put your foot down since your already at a standstill. Explaining this is futile. I didn't get a ticket just a warning. Which was darn nice of them.
popo- You need to get mirrors on that.
perp -I do have a mirror.
popo-Well you didn't seem to see us behind you right away.
perp - I was watching the crest of this hill to make sure no one turned left into me at the top of it... yes your right officer.
popo - Watch out they're doing speed traps on this road.
perp - Thanks I appreciate it.. but this thing aint no crotch rocket.. it's 60 yrs old. If you get me going fast I should get a trophy!
Posted by t 5 comments: 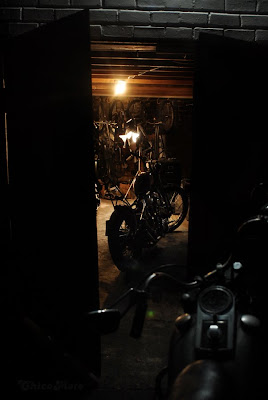