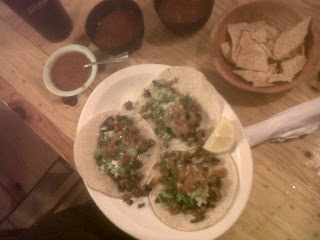 Perfect tacos across from the repair shop. Guys there recomended it but as I learned same guy owns both mexican places. I was out trying to start the bike after but it wasn't staying running. The taqueria owner came along. Got gas?
yeah I got .. Checked in the tank ... no gas. I was thinking it was something else and not the obvious. Forgot that was the point I got off the freeway when I realized I had no headlight . I had rode right to a suggested parts store as it was getting dark and places were closing. I would have been stuck there for the night. Forgot all about getting gas. The owner drove me over to get gas, he grabbed a big bucket and we filled up some gas in that. They wouldn't let you fill a bucket full of gas in Anal Seattle. He didn't have a funnel so we poured the gas out into a glass jar which I then emptied into the tank. Felt like we were mixing up some moonshine. I told him his Taqueria in Arbuckle was my new favorite and I'd tell some friends about it.


Sent via BlackBerry from T-Mobile
Posted by t

makes me feel better about constantly forgetting about the fuel tap... or fuel for that matter and having to hang of the bike like a chimp to eek the last few drops out. i've lost count of the times i've rolled into a petrol station bone dry. but actually fallen short... just once i can remember.

Cool of the taqueria owner to lend such a big hand. That's biker love for ya.Those tacos look mighty tasty.

glad you didn't get stranded anywhere.. also, is that snow in the photo above?? brrrrrrrrrr